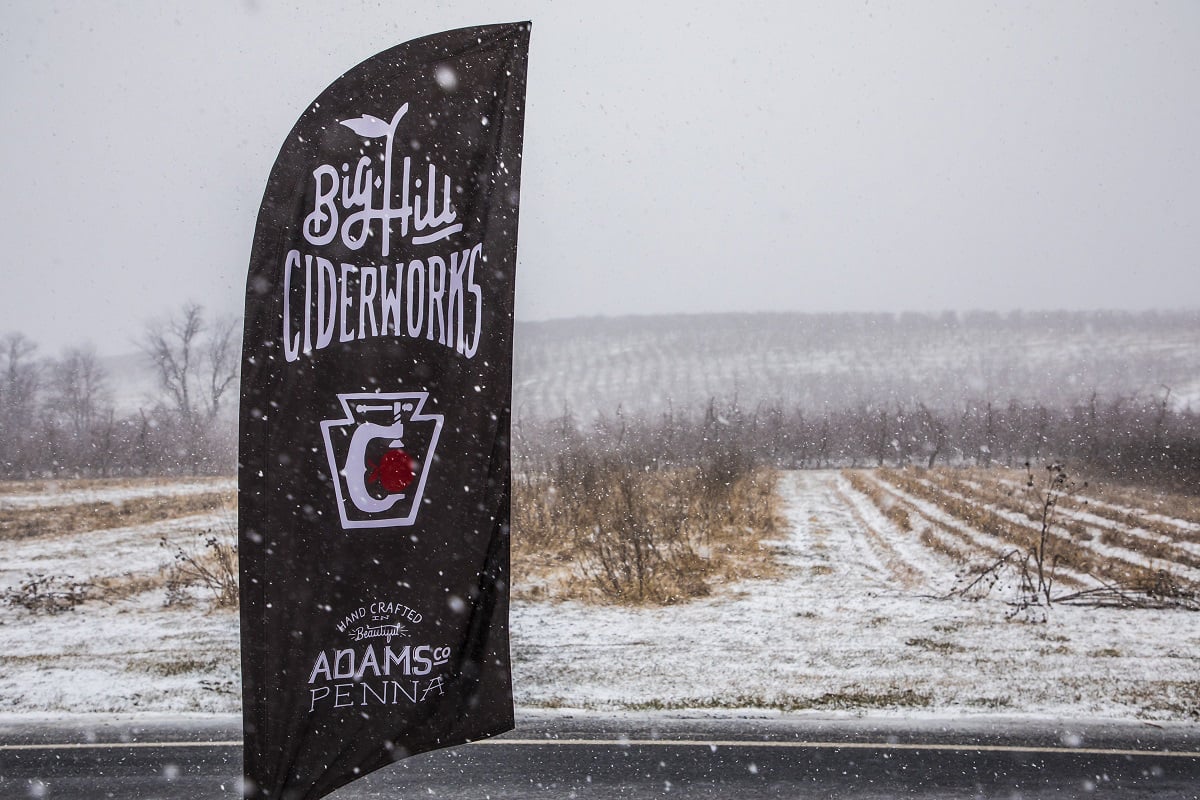 It’s Still All About the Apple: Abundant Agriculture in Adams County

There are a lot of ways to be creative and innovation when making cider. After all, half the battle of creating any artisan product is problem-solving. But no matter how outside-the-box your methods, one thing is set in stone: You can’t make good cider from bad apples. It just isn’t possible. Quality ingredients are paramount in the production of craft cider — after all, with apples and yeast as your only base ingredients, there’s really nowhere for mediocre apples to hide.

Members of the PA Cider Guild are blessed with living in one of the most apple-rich states in the country. Pennsylvania’s apple-growing industry is huge (it’s our fourth-largest agricultural commodity) and nowhere is this more apparent than in Adams County, aka “The Fruit Belt.” This area, which includes Gettysburg and many of the surrounding townships and boroughs, is the largest producer of apples and peaches in Pennsylvania: It stretches from the southwest to the northeast in Adams County and starts with more than 20,000 acres of farmland on the southeastern slopes of South Mountain. The area is blessed with well-drained and mineral-rich soil that many compare to the soil composition in parts of Italy.

Evidence of the apple industry is everywhere in Adams County, with dozens of orchards and farm markets dotting the verdant landscape, the Adams County Fruit Growers Apple Blossom Festival in the spring, the National Apple Harvest Festival in the fall and the Guild’s own PA Cider Fest each summer.

A healthy craft cider industry is a natural outgrowth of Adams County’s apple bounty. Industry leaders like Jack’s Hard Cider, Ploughman Cider and Big Hill Ciderworks are headquartered there, and continue to excel in both the art and science of cider, thanks in part to the stellar ingredients on hand. The existence of these ingredients comes down primarily to soil and topography. Jack’s Hard Cider uses all local apples, including Granny Smith, Roxbury, Russet and Winesap apples from Conewago Orchard for its seasonal Conewago Blend. Ploughman’s farmhouse-style ciders are all made with apples grown on owner Ben Wenk‘s family farm in Aspers, Three Springs Fruit Farm.

“As far as soil types, I don’t know that you can have better soil to grow tree fruit in than Adams County,” said Troy Lehman of Big Hill Ciderworks. “The majority of the county is a silt loam soil, well-drained and very rich in nutrients.”

He explained that the microclimate also plays a big part for the fruit-growing agricultural community. “The elevation plays a large part. It’s a more hilly topography, so you have a lot of cold air drainage and that kind of insulates us from the worst of some of the freezes.”

Troy and the Big Hill team make cider from apples grown on his farm, 14 acres of which are devoted to an apple orchard. Because culinary apples are the primary crops and exports from Adams County, he says there’s still a lot of trial and error when it comes to which heirloom and cider apple varieties will thrive on his farm.

“I probably have one of the oldest plantings in the area and it was only planted in 2011, so we’re really trying to learn a lot about what grows well,” Troy said. “We don’t know a ton about what rootstocks will grow well and be most productive. I feel like I’ve gotten lucky a lot.”

Some of Troy’s luck extends to which apples he has tried to grow. Golden Russet, Spitzenburg, Black Twig, Somerset, Stoke Red, Manchurian Crabapples and Dabinett have all grown relatively well for him. A few others, like the French apple Medaille d’or, have caused some problems. “I think those gave me some fire blight issues,” Troy said. “I love the fruit, but it’s not worth it to have it in my orchard.”

Culinary apples are a more proven bet in Adams County, and Lehman grows some of those, too, though he has his favorites and not-so-favorites for cider making.

“Cider makers all over the Mid-Atlantic region are all looking for Gold Rush, but to me, that’s like shooting fish in a barrel,” he noted. “Everybody’s doing it, but then everyone’s ciders all have the same phenolics in some ways.” He noted that while Gold Rush apples grow extremely well in Adams County, the hotter summers caused by climate change may have an effect on this. “There’s a lot more cracking closer to harvest, so you’re losing some of the storage of that apple,” Troy said. “I’ve been actually trying to plant some of the southern apples that can handle or tolerate more heat, like the Arkansas Black and Black Twig.”

York Imperial is an older culinary apple that Troy uses frequently. “I love them for cider; I really like what that apple does soured,” he said. “That’s the one for me, just because of its versatility. That’s kind of my go-to for acidity in modern and sour ciders.”

Even cider makers who don’t live in Adams County look to the area for their apples. Joe Getz of Philadelphia-based Kurant Cider orders occasional single-varietal pressings of Winchester apples from Big Hill for special releases. “They’re one of the only orchards in Pennsylvania that grows that specific apple,” Joe said.

Good Intent Cider, which started in Gettysburg in 2012, but now runs a tasting room in Bellefonte (in Centre County near State College) sources 95 percent of its apples from Adams County. “They’re the best apples in the state!” said owner Adam Redding.

Adams County is just one more reason why the Pennsylvania cider industry is taking off, but it’s not the only region growing amazing apples by the ton! Check out our post on apple growing in the eastern part of the state, and keep an eye out for future posts about other parts of Pennsylvania!