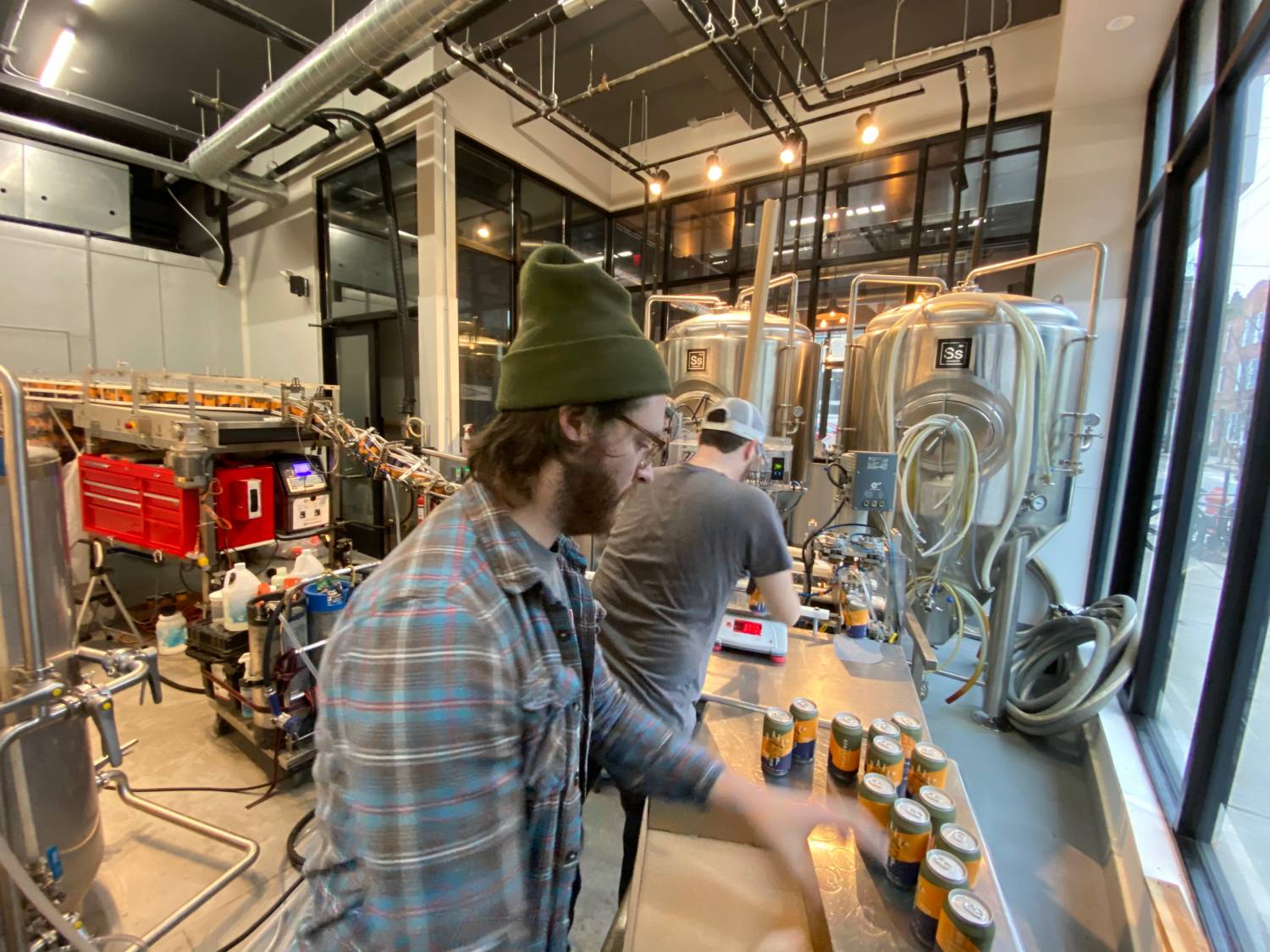 How Cider is Made

In reality, it’s a surprisingly complex process, with many decisions along the way that affect the final product. Plus, since cider is fermented, there are all the trials and tribulations of working with live yeasts and bacteria (if you’ve ever made sourdough bread at home, you know what we mean).

To demystify and explain the process of cider making, we thought we’d give you a peek behind the curtain at how commercial cider is made. Kerry McKenzie, the co-owner and head cider maker at Hale & True Cider Co. in Philadelphia, was kind enough to chat with us and talk through how he makes cider in their urban cidery.

Disclaimer: Cider making techniques range widely, and there is not one, or one best, way to make cider. The method that Kerry lays out may differ from how you’ve seen it happen at other cideries! 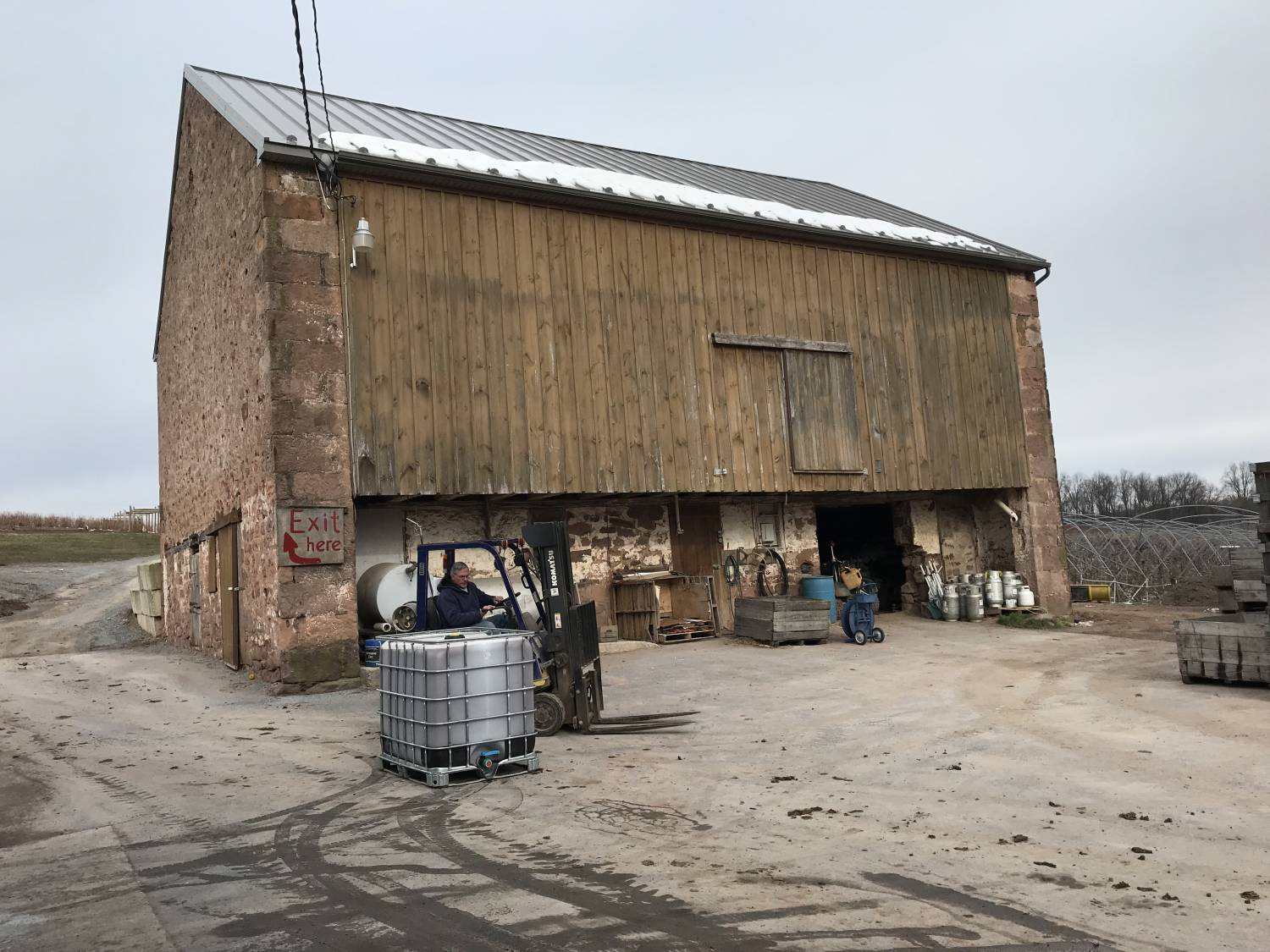 “It all starts with apples,” Kerry says.

This is the first juncture where cider makers can influence their cider. Some cideries are located on farms with orchards, and harvest and press their own apples. Other cideries, especially cideries in cities, purchase fruit or juice from apple orchards in more rural areas.

At Hale & True, they work with a local orchard who picks a blend of apples, crushes and presses them on-site, and then puts the fresh-pressed juice into a 275-gallon tote for Hale & True.

“I drive out there, pick that tote up, bring it back to our cidery and pump fresh cider into our tanks,” Kerry explains. 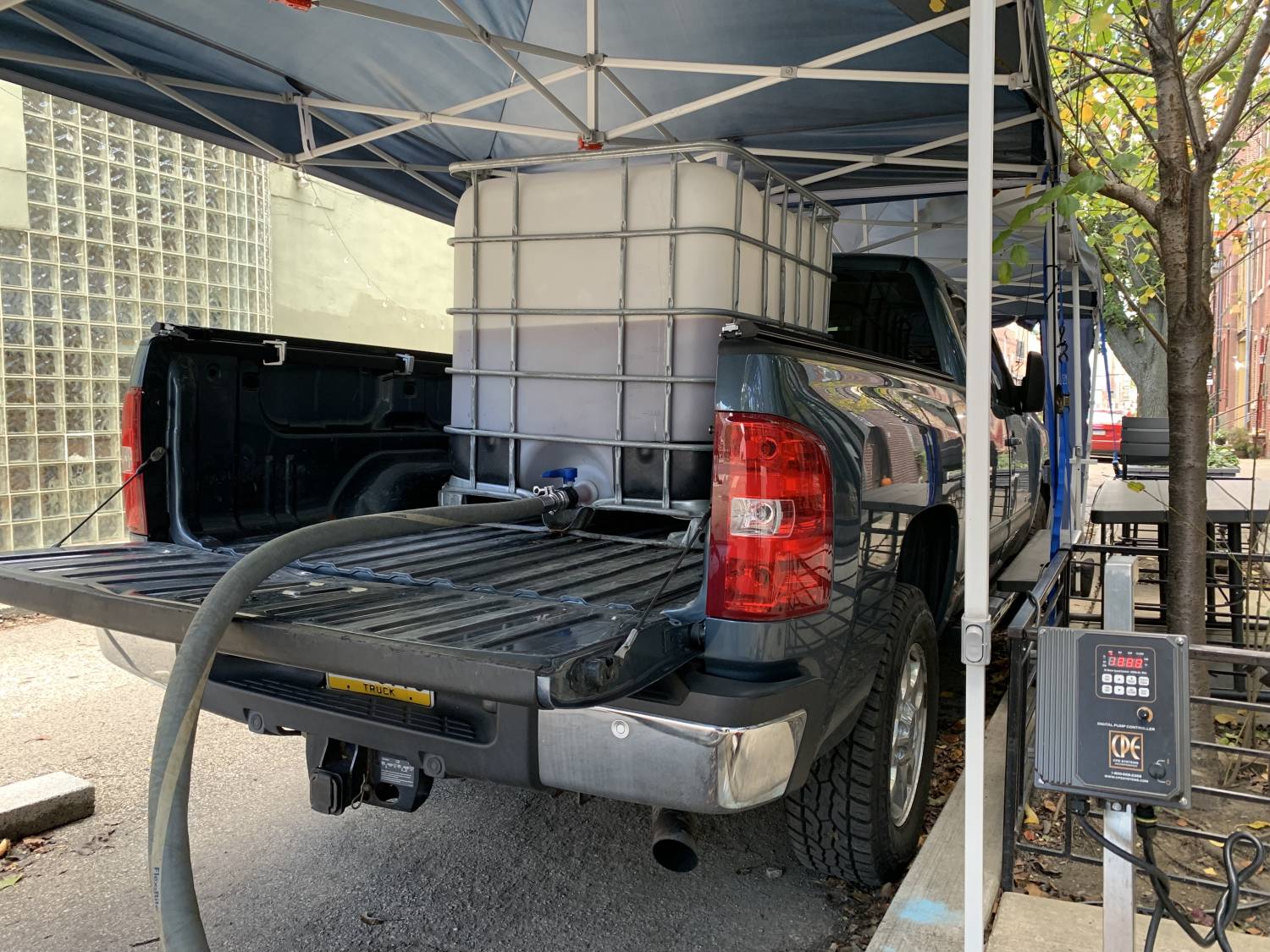 So much of cider making is about cleaning and sanitizing, so Kerry is quick to add that the tanks are all cleaned and sanitized first. Once the juice is pumped in, Kerry (like many cider makers) adds sulfites to inhibit the growth of bacteria and wild yeasts.

After the juice is in the tanks, Kerry waits 48 hours, then pitches yeast (this is just a term that means adding yeast). First, the yeast is slowly rehydrated with hot water and a bit of fresh cider, and given a good stir. This gently and slowly wakes the yeast up. Then, that mixture is added to the tank. Kerry places a ladder up against the tank, climbs up and tosses the yeast right into the juice. 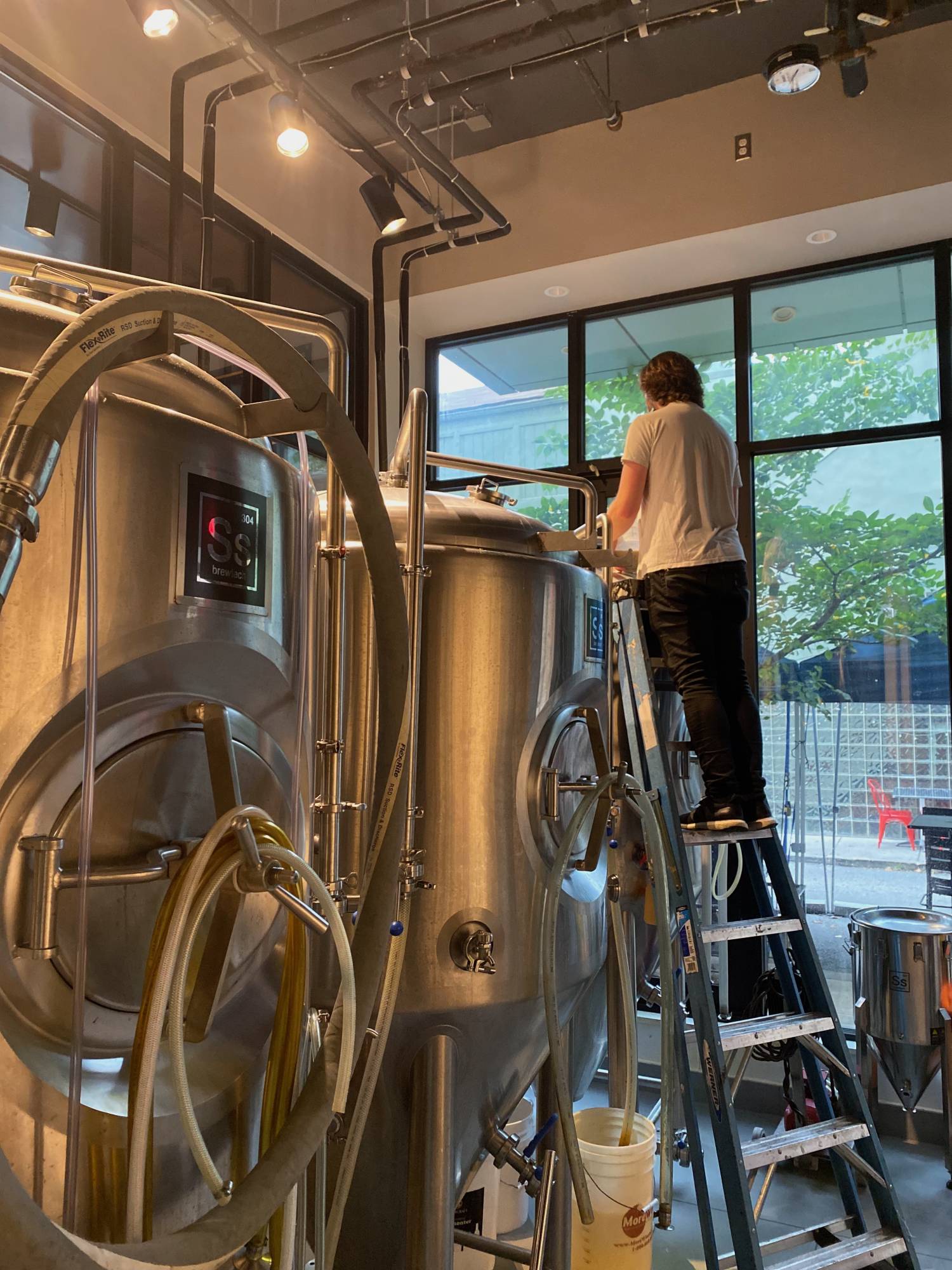 There are all sorts of commercial yeast strains that cider makers can use, depending on the outcome they desire. Some cider makers use wine yeasts, some use beer yeasts and others use a combo of both. Wild or spontaneous fermentation is when cider makers don’t pitch any yeast, and instead rely on the naturally-occurring yeasts on the fruit and in the air to start the fermentation process.

Here’s where the magic starts to happen: fermentation. The yeast eats the sugar in the juice and produces CO2 and ethanol (alcohol) as byproducts. At Hale & True, they blow off the CO2 safely with a hose that goes into a bucket of sanitizer. About a third of the way through the process, Kerry adds yeast nutrients, because as the yeast eats the sugar it’s also eating the available nutrients, like nitrogen, and those can get depleted.

“If the yeast gets unhappy, it starts producing this sulfur smell, which is a problem. To prevent that, you add nutrients,” Kerry explains.

“By controlling the temperature, you can get very different flavors from the cider,” he says. “For our cider The Standard, I ferment colder so it takes longer, and that brings out more fruity characteristics. With other ciders, if I’m adding things like hops, I’m going to ferment a little hotter, just by roughly 5 degrees — and that can make a difference.”

If there are other ingredients, like hops or fruit, included in the cider, those can be added at various stages, according to the cider maker’s vision for the cider.

“Things like hops, spices, fruit and teas are added post-fermentation; basically, those ingredients just hang out in the cider, like steeping tea,” Kerry says. “You can add the ingredients at other times, too, like when you add the yeast nutrient, or at the very end of fermentation.”

Sometimes cider makers co-ferment the ingredients with the juice, which is a more experimental approach and can create new, interesting flavors.

The cider spends two weeks in primary fermentation, and then another two weeks to finish that out and settle the yeast.

“We use conical fermenters, so all the yeast and sediment collect at the bottom. This mixture, which is called the lees, is racked off,” Kerry notes.

Some cider makers rest their cider on the lees, which affects its texture, clarity and flavor, and can encourage malolactic fermentation (a second round of fermentation where bacteria convert malic acid into lactic acid and carbon dioxide). Sometimes, Kerry says he rests small batches of cider on the lees. Many cider makers also choose to filter their ciders at this stage.

Once the lees are racked, Kerry lets the cider rest for at least another two weeks. Then, the tanks are crash-cooled down to 35 degrees, and the cider transferred to a brite tank. Brite tanks are where ciders are force-carbonated via CO2 pushed through a carb stone. The brite tanks are pressurized to keep the carbonation intact.

“At Hale & True, we serve cider right from the brite tanks at the bar!” Kerry says.

There are other ways to carbonate cider, as well. Some cider makers naturally carbonate cider, by adding a little cider and yeast to the cider before it’s packaged. In that case, a second fermentation will happen in the bottle which captures the CO2. Petillant-naturel ciders use a different method: the cider is bottled before it completes its first fermentation, and the remaining yeasts eat whatever sugar is left, which also creates bubbles.

Once the cider is complete, some cider makers will rest it for even longer in tanks or wooden barrels. Others will go right to packaging, kegging the cider for their own tasting room or for wholesale, and using a canning or bottling line to prepare the cider for retail.

At Hale & True, they do both, as they serve cider to guests at their taproom, as well as distribute to bars, restaurants and bottle shops in the area.

We hope you’ve enjoyed learning about how cider is made at Pennsylvania cideries. Stay tuned for a blog post about how to make cider at home, with advice from a professional local cider maker!